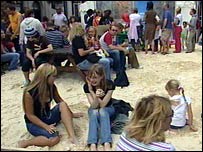 Thousands of people have enjoyed a Spanish festival at the heart of London’s busiest shopping district. Organisers said the seventh Regent Street festival was the most popular yet, as visitors enjoyed the sunshine and various events.
A beach was created on the street, where representatives of 14 Spanish regions lined up to offer flamenco dancing, food and wine.
Regent Street Association chief, Annie Walker, said it had been “amazing”.
Retail has become much more of a leisure industry, people expect entertainment
Annie Walker
She told the BBC the Spanish tourist office had approached the association, following the success of previous festivals.
Last year’s event, which saw Oxford and Piccadilly Circus become giant gardens, attracted about 300,000 people.
But Ms Walker said this year’s had been the most popular yet and was important for the street’s businesses.
“It’s very important. Of course retail has become much more of a leisure industry, people expect entertainment – something different ad that’s certainly what the festival offers. It’s been absolutely fantastic.”
Eight Menorcan horses performed to a brass band, and a temporary beach was enjoyed by adults and children alike.
The festival, which started at noon, has been running for seven years and is funded by the shops and the landlord, the Crown Estate.
As well as events on the street itself, the shops run their own promotions including competitions, wine tasting, samples and special offers.
Other attractions include sand sculptures, Catalonia’s Castellers – a human tower – and a chorizo barbecue.
The festival, which promotes businesses on Regent Street, runs from noon to 2000 BST. Regent Street will be closed between Piccadilly and Oxford Circus.